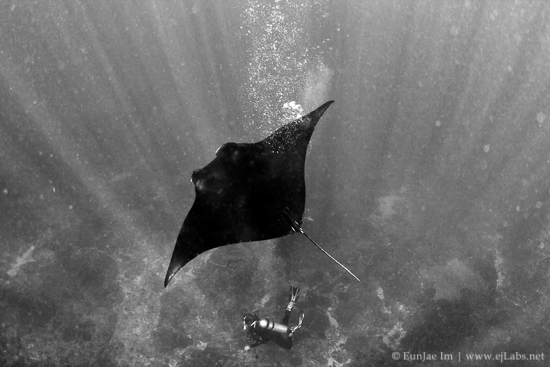 Manta rays facing extinction threat.
We must act to protect before they are lost forever.

Manta rays are subject to a number of anthropogenic threats. Unlike their bottom-dwelling relatives, mantas must swim constantly in order to flush oxygen-rich water over their gills, making them vulnerable to entanglement and subsequent suffocation. Mantas cannot swim backwards, and because of their protruding cephalic fins, they are prone to being caught in trailing fishing line, nets, and even loose mooring lines. Mantas will often attempt to free themselves by somersaulting, tangling themselves further. In the case of loose, trailing line, it is possible for the line to cut its way into the fleshy appendages of a manta as it swims, eventually resulting in irreversible injuries such as loss of cephalic fins and damage to pectoral fins, or even death if the wounds are severe enough. Similarly, mantas are often entangled in gill nets used in coastal and pelagic fisheries, resulting in suffocation and death in most cases.[24]

While bycatch and accidental deaths are likely to heavily impact slow-growing manta populations, targeted fisheries for manta rays are even more harmful. In the last decade, demand for manta gill rakers—the tough, cartilaginous structures protecting the gills and straining plankton from the water—has been growing in Traditional Chinese Medicine practices, although the remedy calling for dried gill rakers has not been shown to be traditional. As a result of growing demand in Asia, targeted fisheries have developed around the world, including in Sri Lanka, Indonesia, West Africa, and Central and South America.[25] Each year, thousands of manta rays—primarily oceanic mantas—are being caught and killed purely for their gill rakers. A recent fisheries study in Sri Lanka estimated over 1,000 oceanic mantas being caught for their rakers in the country’s fish markets each year.[26] In comparison, oceanic manta populations at key aggregation sites around the world are all estimated to be significantly less than 1,000 individuals.[27]Targeted fisheries for oceanic manta rays in the Sea of Cortez in the ’80s and ’90s wiped out the local manta population, which to date has still not recovered. Intense, targeted fisheries for manta rays have long-term detrimental effects, due to the low reproductive rates and long lifespans of mantas.